Religious nationalism remains an important phenomenon in the last three decades, which has manifested itself in an explicit manner after the fall of the Soviet Union.   The books under review seek to study the phenomena of terror and violence, unleashed across the globe, which the authors argue, have deep linkages with the advent of religious nationalism.

At the outset, Mark Jurgensmeyer’s argument about the rise of religious nationalism as the new ideology replacing the ideological strife of the cold war era, in terms of intensity may be relevant with reference to Punyani’s book.   The present world order since 9/11 in the USA, the series of terror strikes in countries like India and various European nations highlight the challenges of religious terrorism emanating from religious nationalism.
Also, another important development that bolsters the phenomena of religious centric terrorism is the overwhelming impact of the globalizing tendencies in the post Bretton Wood world order.  They seek a standardization and homogenization in terms of institutions of governance, trying to promote democracy and free market economy as an universal ideology along with the movement of labour and capital.
The works of Ram Puniyani and Vivek Chadha are  sincere attempts to unravel the complications and challenges to the secular and liberal social order in the present scenario.    The emergence of religious terror as a predominant discourse sometimes is juxtaposed according to Ram Puniyani, with the majoritarian sentiments backed by the state apparatus to the detriment of the minority community.
The challenges of religious terror are manifold as the authors argue that this phenomenon carries with itself, (a) devastating potentialities to undo all the major achievements in the modern secular world and, (b) to blur the geographical and national boundaries, in terms of movement of capital and support to terror activities in an age of transnationalism.   What is more critical is the evolution of terror networks through faith based organizations and money laundering in the name of serving the marginalized sections and addressing social evils through civil society organizations.
The recent trends of corporatization of terror outfits like the ISIS and the success of NGOs in topping the governments in some countries is a cause of concern, wherein the western attempts to foist democracy as an universal ideology has backfired, whilst enraging the various socio-cultural groups, leading to the mobilization and assertions, as Punyani’s argument suggests, that western attempts to foist democracy as an universal ideology has backfired leading to mobilization and assertion, which are attempts to confront the western hegemony through globalization.

Scholars have sought to trace the historical evolution of various group identities that fostered faith based terror outfits and resultant conflicts amongst them in South Asia and other regions.    This phenomenon has been aggravated by the western discourse under the stewardship of the United States to usher in an ‘universal jurisdiction’ to modernize and secularize the traditional societies.   The enterprise of ‘reconstructing’ in order to contain religious strife’s, is also fraught with its own consequences, notwithstanding the colonial legacy of major western powers propelled with the politics of memories, over their obliterating impact on the traditional societies.
In other words, the financial networks, money laundering networks and fund raising campaigns have the propensity to further the cause in the non-western world to establish a ‘high standard of morality’ in public life, to seek solace in a system wherein religious and political identities are fused.   The traditional notions of nations and nationalism is coming under severe strain due to globalization and deep penetrating power of Mcworld institutions. Vivek Chadha’s insightful assessment of the transformation of terror outfits across the globe, is akin to the global operations of MNCs seeking s a large number of background activities to create and launch the final product.    Chadha states that the cost of the product is not merely its market price, but the cumulative cost of its development.   This is vindicated by the series of networks between various terror outfits, drug cartels, and sections of banking and finance at a global level.
These challenges remain confounded as the two works suggest,( in wake of an ambivalent State in some nations) lack of means and will, for a concerted international response to confront the deep transnational religious linkages and their enormous financial networks.   The networks of the Vishwa Hindu Parishad and the Tablighi Jama’at movements outside India, after the advent of neoliberal reforms, in many parts of the globe are significant indicators of adopting different strategies in different places for fund raising and recruitment. The role of Diasporas in contributing towards the long distance nationalism and religious terror merits attention.
The post 9/11 world era highlight the same predicament faced by various nations in addressing the societal challenges, that seeks to influence the socio-cultural realms and  influence their respective markets.   The concept of the global village as propounded by Marshall Mcluhan has become an intrinsic reality of the present world order.  However it has demonstrated the potentialities of fostering transnational collaboration and networks to further the cause of faith and terror, and movements against the tide of cultural homogenization.
The Challenges according to Punyani are the advent of Hindutva in India and their subsequent attempts for a strategic alliance, marked by the rise of Christian right across the globe.  This seeks to pursue belligerent means and goals of confronting the Muslim world and thrust democratic regimes in their neighbouring states.   This exercise is denounced on the ground that it would only facilitate the imperial forays of the US in their respective regions, at the cost of undermining the local, social, and traditional orders, probably falling into the Huntington trap to discredit and vilify Islamic world.
The traditional understanding of national security was confined to territorial security but ignored the well being of citizens as an essential component of national security.   In other words, national security required the safeguarding of national goals.   In the Indian scenario, where secularism is a core value in our national goals, they have been severely challenged by the series of communal conflagrations in India.
The books are a welcome intervention and try to bridge the divide between domestic and international politics. The south Asian region remains Indo-centric in terms of its geographical spread and asymmetrical power structure. Politicization of religion or fundamentalism of any kind is not peculiar to any particular country and a broad perspective needs to be adopted while exploring the linkages between terrorism, fundamentalism and globalization. Containing the terrorist violence and countering the lifeblood of terrorism calls for a concerted political will of all the nations around the globe and the larger question remains about the complicity of the state in religious conflicts, which could strip them of their neutrality and legitimacy.
at April 27, 2016 No comments:

An island of equanimity amidst the sea of turbulence


“Journalism can never be silent: That is its greatest virtue and its greatest fault. It must speak, and speak immediately, while the echoes of wonder, the claims of triumph and the signs of horror are still in the air.”
– Henry Anatole Grunwald
Along the Red River: A Memoir by Sabita Goswami, translated by Triveni Goswami Mathur.  New Delhi: Zubaan, 2013. 320 pp Pbk, ISBN 9789381017012.

Reviewed by R. Radhakrishnan
Symbiosis International University, India
A memoir is usually an outlet to tell an untold tale, where the writer usually talks of his/her achievements and their relentless struggle to attain their objectives apart from confronting the usual vagaries of life and the challenges in negotiating with the world around them.  Along the Red River by Sabita Goswami is more than a memoir and it  comes at a time when the world is infested with memoirs written by some people which are merely a “tell all tales,” collection of anecdotes about movers and shakers and their tryst with destiny.
A memoir as one’s personal account and commentary is also an arduous task of not gravitating towards partisanship, for its presence in the public domain, also renders personal getting transformed into political. Hence a memoir by this logic has an inbuilt idiosyncrasy, of presenting an account of agony as well as ecstasy.
Along the Red River is a memoir written by a person with a multilayered identity – a woman, a mother, a journalist, an observer and commentator covering one of the regions with a turbulent history, a chronicler of our times, who was witness to the traumatic encounters of the nation building exercise, experimented in India’s northeast region.
Since independence, the northeast region of India has been confronted by a series of problems ranging from uneven development, ethnic and cultural minority syndrome and influx of illegal migrants have shaped the politicization of ethnic identities and the separatist movements in the Northeast.  While many policy analysts’ have written about this region and called for resolving the crisis which continue to even baffle many scholars of the Indian constitution, since the federal state with unitary features have, over the years, given adequate space for a kind of consociational democracy, as propounded by political scientists like Arend Lijphart. 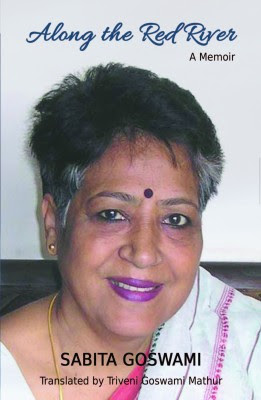 R Radhakrishnan
Secunderabad, Telangana, India
I am an eternal nomad who had straddled across different professions at different point of time. Prior to my stint as a faculty, I had worked as a Political Analyst, providing inputs to Parliamentarians on issues concerning governance & foreign policy and as a Researcher in a think-tank, in a project on alternative approaches to security.